Thousands of holidays during the festive period have been cancelled due to coronavirus restrictions imposed by destinations.

Has your Christmas trip to Europe been ruined?

Winter sports operator Crystal Ski has axed its trips to Austria departing on December 27 after the country introduced tougher entry requirements due to the Omicron variant.

Austria announced on Wednesday that arrivals from the UK will be required to quarantine for 10 days from Saturday unless they are fully vaccinated including a booster dose, and have evidence of a recent negative PCR test.

Crystal Ski issued a message to customers on Thursday night which stated: ‘Unfortunately, due to the short notice of the new Austrian entry requirement, we’ve made the difficult decision to cancel our holidays to Austria on 27th December.

‘We know that last-minute testing is extremely challenging, even more so given that the tests would need to be taken on Christmas day or Boxing day.

‘With limited testing availability and capacity nationwide, we’re aware the vast majority of our customers would’ve been unable to meet this new requirement to travel.

‘We’re sorry for the disappointment this has caused.’

Affected customers are being offered a full refund within 14 days, and an incentive to rebook.

Thousands of holidays during the festive period have been cancelled due to coronavirus restrictions imposed by destinations.

Austria announced on Wednesday that arrivals from the UK will be required to quarantine for 10 days from Saturday unless they are fully vaccinated including a booster dose, and have evidence of a recent negative PCR test 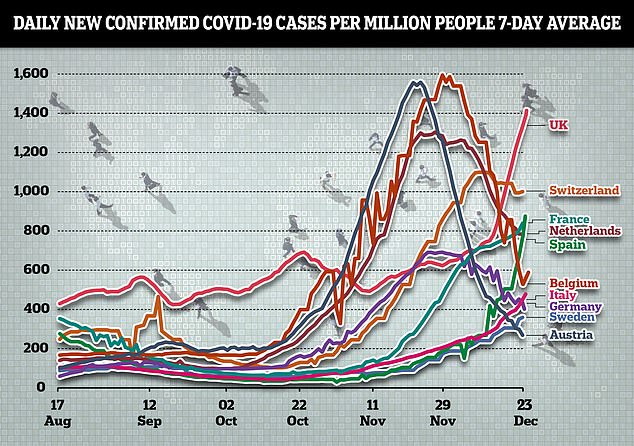 Those due to depart for Austria on January 1 or 8 are able to change their plans without paying a fee until December 29.

However, the new Austrian travel rules that start on Christmas Day have sparked chaos because they inadvertently ban British 16-17-year-olds from entering the country at all.

While under-12s are exempt from travel the travel restrictions, 12-15-year-olds can enter without the need for a booster jab using a ‘Holiday Ninja Pass’ introduced for that age group.

Therefore, anyone who is 16 or over will require a booster jab or face the 10-day quarantine under the new rules. However, current UK guidance stipulates that only those 18 or over are eligible for a booster jab.

As a result, 16-17-year-olds are unable to get the required booster to enter Austria, leaving some families with teenagers from that age group hoping to travel there after Christmas in a difficult position.

Hundreds of affected customers took to Twitter to bemoan the new restrictions and demand refunds due to the last-minute changes.

Helen explained: ‘Literally called yesterday to move ours and was told we were not able to cancel and to do so now would cost us £2000! Now it’s all cancelled. They only let us move to 2023.’

Meanwhile, Amy wrote that the new restrictions meant she wanted to change her planned honeymoon.

Travel firms experienced a surge in bookings for winter sports holidays in Austria after France introduced a ban on UK tourists last week.

Cruise line MSC Cruises has cancelled four sailings from the UK by its ship MSC Magnifica due to pandemic restrictions across Europe.

The cruises, due to depart from Southampton on December 21 and 28, and January 4 and 11, were scheduled to call at France, Germany and the Netherlands.

The Netherlands has been put into lockdown until at least mid-January, while Germany has joined France in prohibiting UK tourists.

Meanwhile, Ryanair has reduced its planned January capacity by a third.

A spokesman for the airline said: ‘The impact of these recent government travel restrictions, in particular last weekend’s ban on UK arrivals into France and Germany, and the suspension of all EU flights to/from Morocco, has lowered Ryanair’s expected December traffic from between 10-11 million, to a lower range of 9.0-9.5 million.

‘In responding to these restrictions, Ryanair has now cut its January capacity by 33%, reducing its expected January traffic from approximately 10 million to 6-7 million.’